Three years ago to the day marks the launch of the Vivecraft website. So auspicious was this event they now set off fireworks to celebrate it annually.

The past few weeks have been non-stop activity here at Vivecraft HQ. The availability of 1.14 modding tools and the release of the Valve index hit us at about the same time. I’ve been dead-ahead getting 1.14 working and Techjar jumped on Index compatibility.

So we’ve got a bunch of new stuff to announce today.

Last year, Valve introduced a new input system for SteamVR called SteamVR Input. Instead of handling button presses directly, games using this new system provide a list of ‘actions’ to SteamVR, and SteamVR provides a user interface for mapping those actions to whatever hardware the player is using. Maybe you’ve seen it in other games. You get to it through the SteamVR Dashboard and it looks like this: 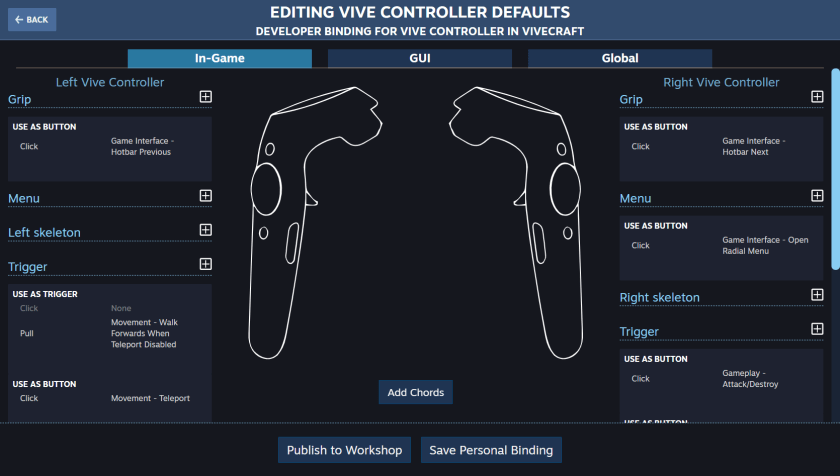 We’ve decided to go ahead and convert Vivecraft to SteamVR Input. This adds much better support for the Index than we ever could using legacy button code, and also provides more flexible button mappings for Vive, Touch, and WMR controllers.

1.12 (the latest version with Forge mod compatibility) will get this new input system as soon as possible which is very exciting. We generate the action list at runtime so all of your mod keybindings will be available. SteamVR Input allows for single press, double press, long press, click, touch, and toggle, so the number of buttons and flexibility means better interaction between a large mod set and VR controllers.

With these releases we’re also shipping a brand-new set of defaults for all controller types based on user feedback.

That was the good news. Now for the bad news.

You’ll get to try the new defaults whether you like it or not, since any existing controller setups cannot be converted. I’m sorry, I’m not happy about it either.

Another caveat is Steam itself is now a dependency. SteamVR Input uses the Steam Workshop to save (and share!) controller bindings, so you will need to have Steam running before launching Vivecraft if you intend to edit your controls.

One last thing: You cannot edit Vivecraft bindings without Vivecraft running. It will not show up in the ‘recently played’ list. It’s not a Steam game so we cannot use a permanent manifest. You also need to fully exit the controller settings and re-enter it if you restart the game, or any changes made will not be applied or saved.

I’ve written a full set of instructions for working with SteamVR Input here. You may wish to give it a read before diving in.

The VR and Non-VR clients, as well as the Spigot server plugin are all now available for 1.14. Consider these in beta, there are a few minor known issues. Will be spending this weekend polishing it up and maybe adding some new VR features (Roomscale crossbow and crawling, maybe)

1.14 is SteamVR Input Only. Sorry, no exceptions. We have too many simultaneous branches of Vivecraft to maintain as-is. I know the SteamVR input screen is complicated, and I know it sucks needing to set your controllers up again, but this is the way forward, and forward we go, together, hand in virtual hand.

So give it a go, update your servers, gather round a campfire or fight through a raid in VR. And then post any bugs you find.

We’re a video game right? so I guess we need to have a roadmap. And recurrent user spending. We’ll stick to just the roadmap for now.

A man spends 24 hours in Minecraft. You’ve probably seen this video already, but if you haven’t it’s very ambitious, well put together, and definitely worth a watch.

A lot of people also saw Pro Mello’s ‘ray tracing video’.  He made 4 more videos after this as well. Which I didn’t know about, Hey youtubers, what’s a guy gotta do to get a shout out around here?

Joshdub is back with some… friends. Surely he’ll list Vivecraft on his vide…. oh.

Instructions for installation can be found on the Downloads Page.

If you think this is awesome you could donate